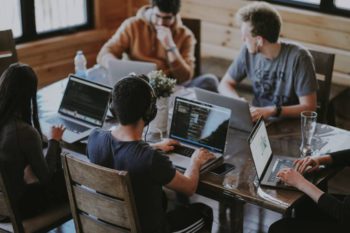 At Intelvision, we offer an outsourced dedicated development team to drive your business growth. 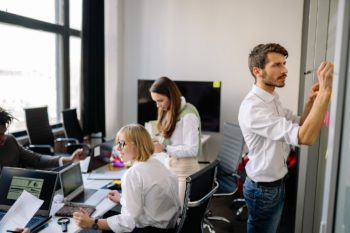 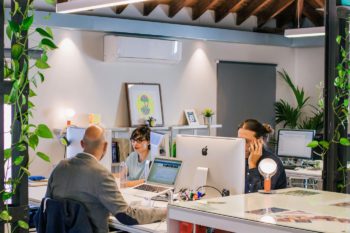 In the recent past, drones have had exclusively military applications. They were used to destroy targets and collect intelligence information. These days, drones provide aerial photos and videography, deliver goods, monitor the weather, and even fly over Mars.

At the end of 2013, Amazon was one of the first companies to use commercial drones to deliver groceries in test mode. Today, there is the Amazon Prime Air program, which provides delivery of small packages within 30 minutes. The scope of such unmanned vehicles began to expand. According to The Drones Report provided by BI Intelligence, drone sales reached $12 billion in 2021.

We’ve analyzed how drones in construction can be used, what their benefits are, and what is the future of this technology.

Drones in the Construction Industry

Today, more than 300 objects in the world are being built with the help of drones, and the total volume of investments in projects with this technology has already exceeded $4 billion.

Legislation began to be adapted for drone flights in the mid-2010s. For example, in the US, a drone operator is a licensed profession, and the service market is actively forming and moving the industry forward.

The synthesis of drone technology in the construction industry and a cloud web platform allows developers to view the original topographic survey and visually assess the area without specialized software. Specialists can quickly calculate, for example, the amount of work to clear the area from vegetation. The technology works like this: 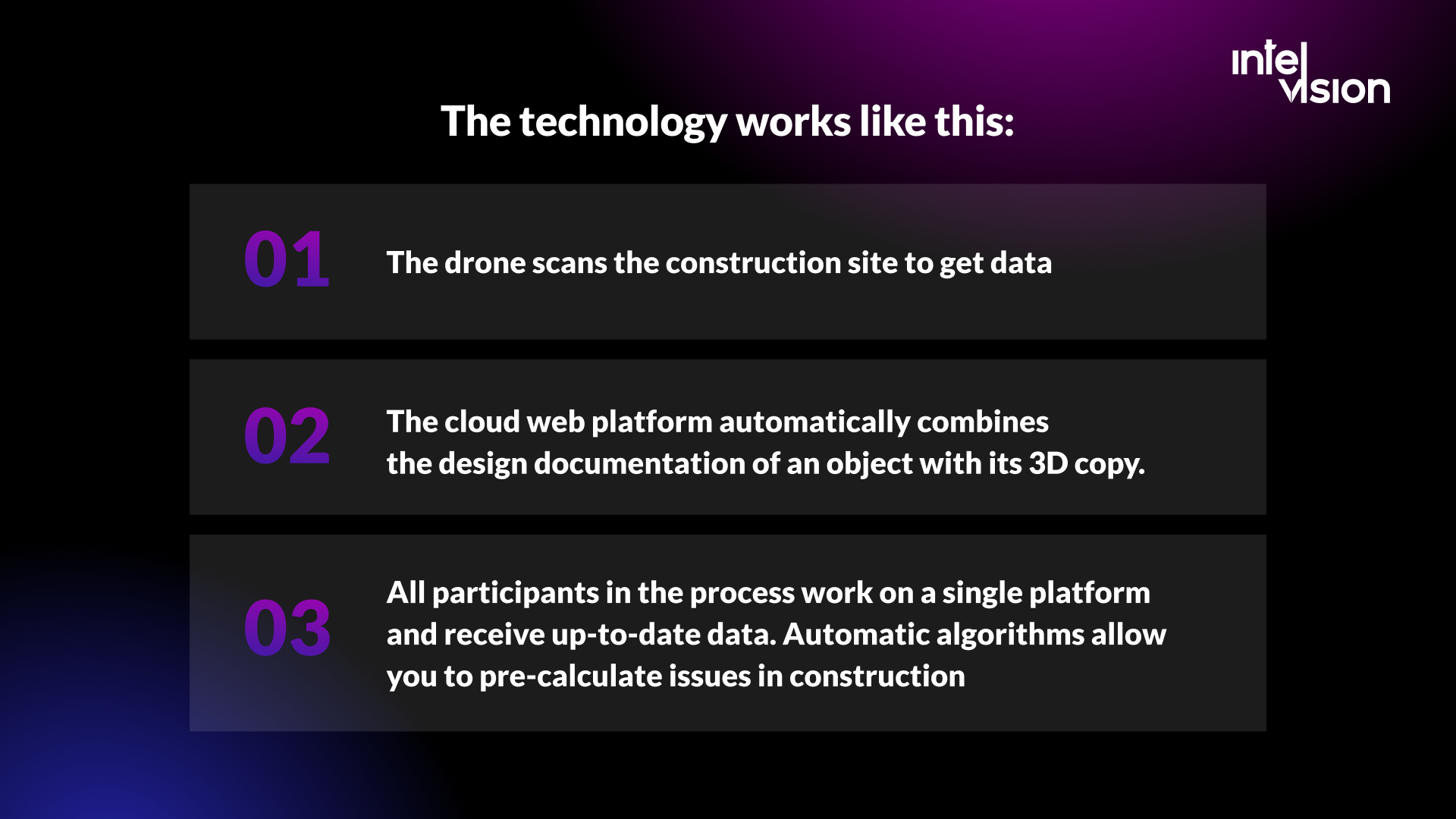 Let’s look more through how drones are helping construction companies save time, and money, improve safety conditions as well as keep customers happy.

Use of Drones in the Construction Industry: 5 Ways Drones Are Changing the Industry

According to a McKinsey study, the construction industry struggles with a great deal of inefficiency. Large construction projects typically take 20% longer than expected to complete and are up to 80% over budget.

Compared to other industries, the industry has been slow in adopting new digital technologies, even though the long-term benefits are significant. It is time for disruption! Here are some of the ways drones are used in construction.

With a drone, the manager can do a flyover and quickly assess whether the equipment is where it needs to be as well as to recognize if a piece of equipment that should be terminated is still on-site, preventing expensive accidental extension charges.

Drone technology in construction can produce quality aerial views and give clients a grasp of the project’s progression without the physical need to be present on a site. In addition, drones in construction can improve collaboration for teams by sending information to connected software during flyovers. Designers, engineers, construction managers, and owners can access the data simultaneously, follow the project and catch any potential mistakes.

Falls in particular account for 34% of worker fatalities. Drones in the construction industry can mitigate the risk construction workers face on the field. For example, managers can use drone video cameras to monitor the job site for safety concerns. Construction companies reported 55% increased safety standards directly related to drones. 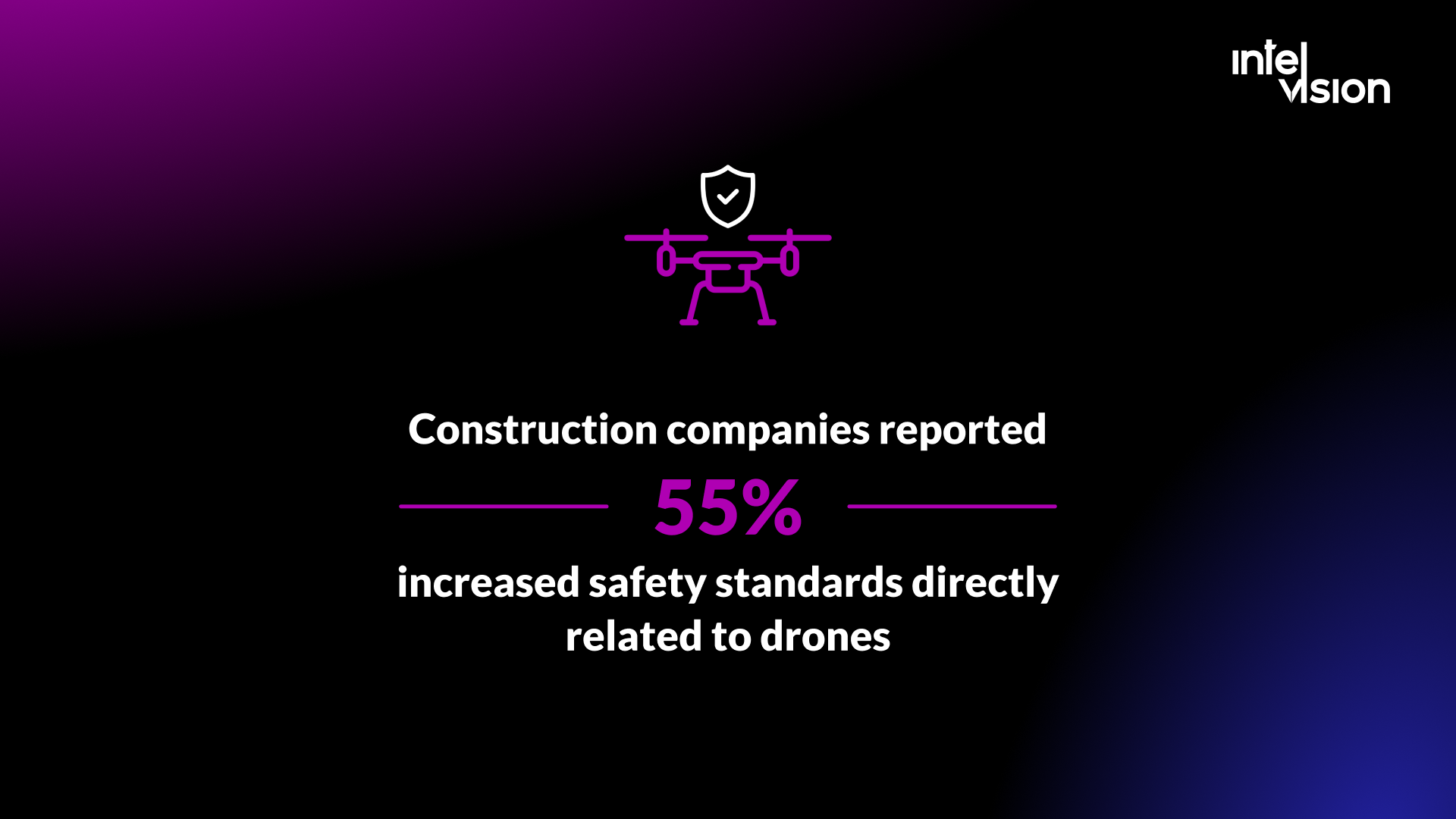 According to the American Institute of Architects, building-related waste makes up anywhere from 25%–40% of America’s solid waste stream. If you consider this percentage against the total US construction spending ($1.13 trillion), it equates to more than $160 billion in waste. Using drones in the construction industry to combat this has led to a 61% increase in measurement accuracy.

When construction companies in the US look at the scope of work over a calendar year, they report being behind schedule by 20 months on average. The main reasons are:

Drone technology in construction significantly reduces time-intensive data collection in the field and its associated labor costs. When equipped with drones, construction companies and developers reported a 65% overall improvement in communication and collaboration and 53% reduced time to data insights.

Types of Drones Used in Construction

Let’s look through the types of drones in construction that most construction companies are using. Remember that every task and every construction site requires a different type of drone to get the job done properly.

The advantage of multirotor drones is that they can take off like a helicopter, and are very stable and maneuverable. The AI drone ​​software used to control the drone is getting better, which means even the most inexperienced pilots can fly and stay in the air with confidence.

A multirotor drone usually has 4–8 rotors depending on the stability and load the drone is carrying. The disadvantage of this type of drone is the relatively short flight time as well as limited endurance and speed. They are not suitable for large-scale projects such as aerial photography or long-range surveillance. The best multirotor drones provide a flight duration of around 30 minutes, depending on the wind and the type of load.

Drones can fly for several hours at a time. If equipped with a conventional gasoline engine, they can fly for more than 24 hours. They are effectively used for aerial surveillance and photography at a great distance and over a large area. However, it requires a much higher level of skill to use, as well as the presence of a runway or catapult to launch the drone into the air.

The main feature of helicopter drones is a longer flight duration and more efficient energy consumption. One of the downsides of using this type of drone is that they are much more difficult to fly, as well as the increased risks while using a helicopter drone. Since they only have one main rotor, the slightest imbalances and collisions in the environment mean they can quickly become unstable in the air.

Construction companies also use hybrid drones, which have the advantages of a fixed-wing model but the stability and maneuverability of other powered UAVs. Similar to a passenger aircraft, a fixed-wing drone relies on its long tilted wings to create a lifting effect while cruising Unlike multirotor, these UAVs do not need so much battery to stay aloft since the lift effect is passive. This is the least common type of drone. It is often used to deliver various goods.

Drones in the Construction Industry Are a Complement to the Workforce, Not a Replacement

The commercial drone market to average annual growth of 24.3% until 2027, according to ReportCrux Market Research. Amazon is working in this direction (a special drone development program in Europe, and a perspective to launch unmanned delivery by drones of parcels weighing less than 5 pounds or 2.3 kg). Merck is in the process of developing its drone drug delivery program. Walmart used drones to deliver COVID-19 tests in Las Vegas. One of the largest pizzerias Dominos introduced its DomiCopter drone, which was used to deliver pizza in the UK.

North Dakota-based SkySkopes uses a UAV to lay power lines in the US. Singapore-based restaurant and bar chain Timbré uses a fleet of flying drones as waiters. One drone is capable of delivering up to 2 kg of food to the table at a time.

Today we are experiencing a new industrial revolution. Robotization will bring another increase in labor productivity, an important part of the evolution of mankind. Where 100 couriers are needed today, in a few years, for example, two coordinators and one technician will be needed. But this doesn’t mean that people will remain unemployed—rather, new areas and professions will appear that are needed to service technology.

Why is Intelvision a Great Fit for Drone-Based Projects

Every business is consistently looking for a way to optimize and cut costs, and drones in construction present this opportunity. About 92% of construction companies using drones saw ROI within one year, meaning that drones in the construction industry pay almost immediate benefits. 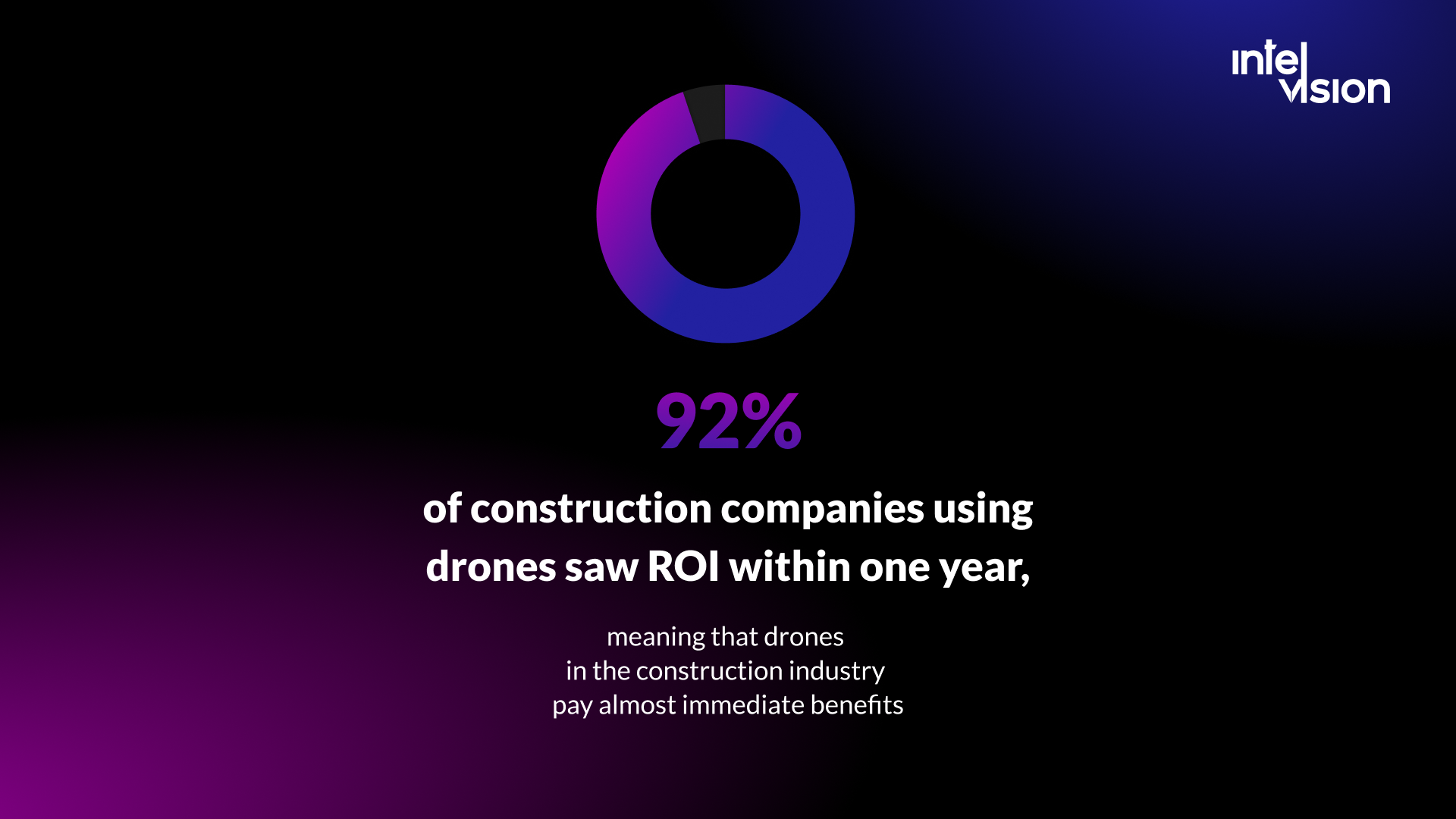 What’s more: companies soon realize the biggest challenge isn’t drones, it’s how to effectively collect, store, manage, interpret, and analyze the volumes of data drones in construction can generate. Captured data is typically stored on memory cards in the drone. After the flight, they are then uploaded to the cloud, where it is either made available as a video or processed in formats suitable for BIM programs and other 3D apps. Asset sharing can be a challenge. To address this, many construction firms are now turning to turn-key, end-to-end drone solutions integrators as a subcontractor on the construction project.

Want to break into working with drone technology in construction? If you’re looking to become the next construction company to move forward on this innovative and promising pathway, Intelvision is your go-to avenue for drone services. We specialize in minimizing pain points, increasing profit margins, and ensuring that drone-based projects are completed within a deadline.

The Future of Drones in Construction

An impressive list of expenses can immediately repel a business owner. However, losses in construction for a day of downtime of a large facility amount to $164.949. The drone, as an element of business process automation, makes the project more profitable by 15%, eliminates the human factor, and thanks to aerial photo monitoring, the communication process between project participants is 8 times more efficient —such conclusions can be drawn based on thousands of cases in the US—both in development and in industrial construction.

As technology advances, drones in construction will be able to take on more tasks in the sector than ever before. In 2020, Kaizen Aerial Solutions introduced their new xFold industrial drone capable of lifting 1.000 pounds. This drone can transport construction materials and other heavy loads on worksites thanks to its high lifting capacity. 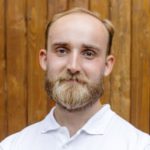 My mission is to help people understand, how IT can help their businesses and drive them to new heights

BIM in the Construction Industry: Impact and Benefits

How to Optimize Your Construction Site Management 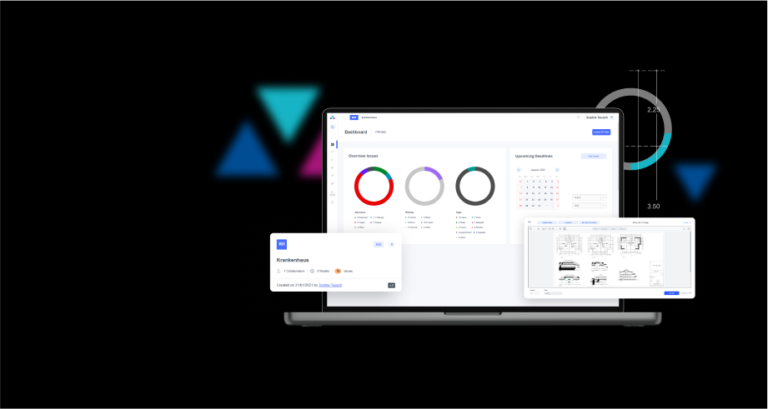 At Intelvision, we offer an outsourced dedicated development team to drive your business growth.

Intelvision is a web application development company that cares about every client’s success. 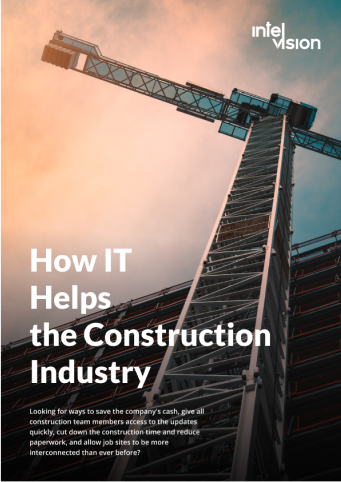 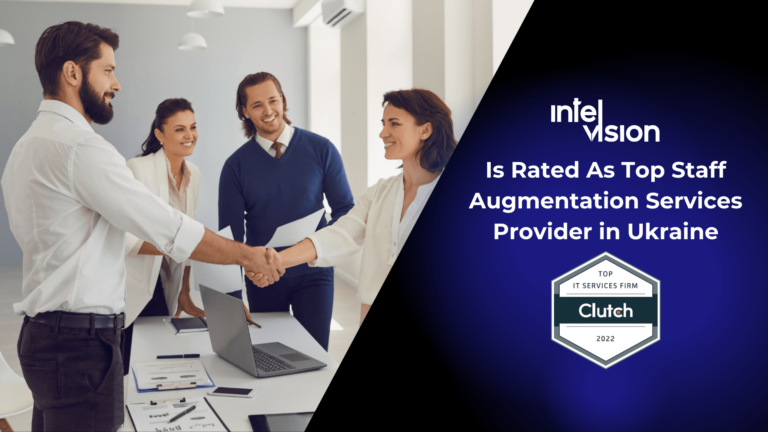 We offer full-cycle IT solutions and consulting services for individuals, startups, and small to medium businesses.

Read more
Careers
We`re hiring
Benefits Our Values
100
+
PROJECTS COMPLETED
5
Years on the market
30
+
Experts
Thank you for your interest!

We use cookies to ensure that we give you the best experience on our website. We record and store information to recognize your repeat visits and preferences, as well as to measure the effectiveness of marketing campaigns. By clicking “I Accept” or using our website, you consent to the use of cookies, unless you have disabled them. For more information view our Privacy Policy.